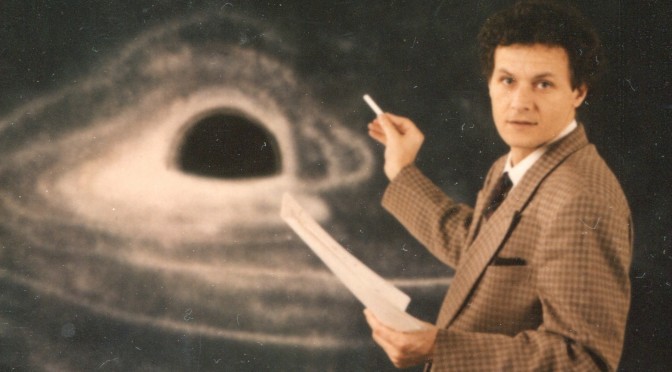 Black holes are to many the most mysterious objects in space. According to the laws of General Relativity, they are by themselves invisible. Contrarily to non-collapsed celestial bodies, their surface is neither solid nor gaseous ; it is an immaterial border called the event horizon, beyond which gravity is so strong that nothing can escape, not even light.

Seen in projection on a sky background, the event horizon would have the aspect of a perfectly circular black disk if the black hole is static (the so-called Schwarzschild solution) or of a slightly distorted one if it is in rotation (the Kerr solution). Due to strong gravitational lensing, such a « bare » black hole could leave an observable imprint on a starry background. However, in typical astrophysical conditions, whatever its size and mass (ranging from stellar to galactic scales) a black hole is rarely bare but is dressed in gaseous material. Swirling in a spiral motion, the gas forms a hot accretion disk within which it emits a characteristic spectrum of electromagnetic radiation. Giant black holes, such as those currently lurking at the centers of galaxies, can be also surrounded by a stellar cluster, whose orbital dynamics is strongly influenced. As a matter of fact, , if a black hole remains by itself invisible, it “switches on” in its characteristic way the materials it attracts, and distorts the background starry field by gravitational lensing.

Thus, as soon as the basics of  black holes astrophysics developed in the 1970’s,  the scientists logically wondered what could look like a black hole. Many of you certainly saw didactic or artistic representations of a black hole in popular science magazines, in the form of a black sphere floating in the middle of a circular whirlwind of brilliant gas. So striking they are, these images fail to report the astrophysical reality. This one can be correctly described by means of numerical simulations, taking into account the complex distortions that the strong gravitational field prints in spacetime and light rays trajectories.

Since the first numerical simulations performed 40 years ago, tantalizing progress has been done to detect black holes through electromagnetic radiation from infalling matter or gravitational waves. The first telescopic image by the Event Horizon Telescope of the nearest giant black hole SgrA*, lurking at he center of our Milky Way galaxy, is expected for 2018.

The aim of this series of posts is to retrace the rich history of black hole imaging.

Black hole imaging started in 1972 at a Summer school in Les Houches (France). James Bardeen, building on earlier analytical work of Brandon Carter, initiated research on gravitational lensing by spinning black holes. Bardeen gave a thorough analysis of null geodesics (light-ray propagation) around a Kerr black hole. The Kerr solution had been discovered in 1962 by the New Zealand physicist Roy Kerr and since then focused the attention of many searchers in General Relativity, because it represents the most general state of equilibitum of an astrophysical black hole.

The Kerr spacetime’s metric depends on two parameters : the black hole mass M and its normalized angular momentum a. An important difference with usual stars, which are in differential rotation, is that Kerr black holes are rotating with perfect rigidity : all the points on their event horizon move with the same angular velocity. There is however a critical angular momentum, given by  a = M (in units where G=c=1) above which the event horizon would « break up » : this limit corresponds to the horizon having a spin velocity equal to the speed of light. For such a black hole, called « extreme », the gravitational field at the event horizon would cancel, because the inward pull of gravity would be compensated by huge repulsive centrifugal forces.

James Bardeen computed how the black hole’s rotation would affect the shape of the shadow that the event horizon casts on light from a background star field. For a black hole spinning close to the maximum angular momentum, the result is a D-shaped shadow.

At the time, C.T. Cunningham was preparing a PhD thesis at the University of Washington in Seattle, under the supervision of Bardeen. He began to calculate the optical appearance of a star in circular orbit in the equatorial plane of an extreme Kerr black hole, taking account of the Doppler effect due to relativistic motion of the star, and pointed out the corresponding amplification of the star’s luminosity. He gave formulas but did not produced any image.
The reference is Cunningham, C.T. and Bardeen J.M., The optical appearance of a star orbiting an extreme Kerr black hole, ApJ 173 L137-142 (1972).

One year later Cunningham and Bardeen published a more complete article with the same title. For the first time a picture was shown of the primary and secundary images of a point source moving in a circular orbit in the equatorial plane of an extreme Kerr  black hole. They calculated as functions of time the apparent position and the energy flux of the point source as seen by distant observers.

In the upper diagram showing the distorted image of a circle of radius  20M, we clearly see that, whatever the observer’s inclination angle, the black hole cannot mask any part of the circle behind. We also see that the black hole’s spin hardly affects the symmetry of the primary image (although the asymmetry is stronger for the secundary image).
The exact reference is Cunningham, C.T. and Bardeen J.M., The optical appearance of a star orbiting an extreme Kerr black hole, 1973, ApJ, 183, 237. The article can be uploaded here.

In 1978 Leigh Palmer, Maurice Pryce and William Unruh carried out,  for pedagogical purpose, a simulation of starlight lensed by a camera orbiting a Schwarzschild black hole, using an Edwards and Sutherland Vector graphics display at Simon Fraser University. They showed a film clip in a number of lectures in that period, but unfortunately they did not publish their simulation, so that I can’t reproduce here any image.

The same year and quite independently, as a young researcher at Paris-Meudon Observatory specialized in the mathematics of General Relativity, I wondered what could be the aspect of a Schwarzschild black hole surrounded by a luminous accretion disk. END_OF_DOCUMENT_TOKEN_TO_BE_REPLACED