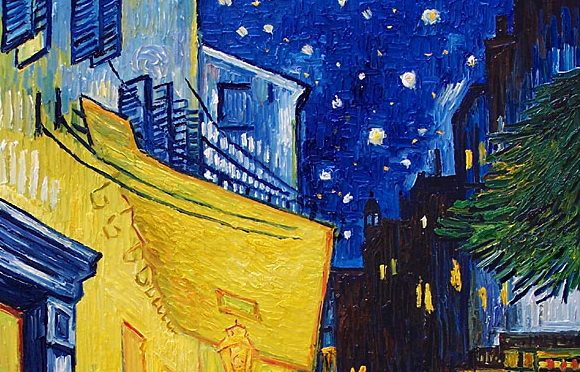 “In which space do our dreams live? What is the dynamism of our nightlife? Is the space of our sleep really a rest area? Is it not rather an incessant and confused movement? On all these problems we have little light because we do not find, when the day comes, only fragments of night life. “

In these texts written from 1942 to 1962 (gathered in Le Droit de rêver, PUF, collection “Quadrige”, 2010), Gaston Bachelard celebrates the difficult synthesis of imagination and reflection that seems to him to guarantee, for writers as for artists such as Baudelaire and Van Gogh’s, fidelity to dreamlike values. “A Van Gogh’s yellow is like an alchemical gold, a gold butine like a solar honey. It is never simply the gold of the wheat, the flame, or the straw chair; it is a gold forever individualized by the endless dreams of genius. It no longer belongs to the world, but it is the good of a man, the heart of a man, the elementary truth found in the contemplation of a lifetime. “

In the series of notes that I begin here, I will analyze in detail the extraordinary reports that Vincent Van Gogh (1853-1889) maintained with the vision of the Provençal sky.

On February 20, 1888, aged 35, Vincent, the man from dark-heavened Northern Europe, moved to the old city of Arles, in the South of France. Although he arrived in the city by a snowy day, he discovered the Provençal light, brighting day and night. Stunned by the transparency of the firmament, he writes to his brother Theo: “The deep blue sky was spotted with clouds deeper blue than the fundamental blue of an intense cobalt, and others of a blue clearer, like the blue whiteness of the milky ways. In the background, the stars sparkled, clear, green, yellow, white, lighter pink, diamond-like diamonds. ” From then sprout in him the crazy project of painting the sky.

On April 12, he wrote to his friend the painter Émile Bernard: “A starry sky, for example, well — it’s a thing that I’d like to try to do, just as in the daytime I’ll try to paint a green meadow studded with dandelions“. He hesitates however and procrastinates, intimidated by the subject. On June 19, he expressed his hesitation to Émile Bernard: “But when will I do the starry sky, then, that painting that’s always on my mind? Alas, alas, […] the most beautiful paintings are those one dreams of while smoking a pipe in one’s bed, but which one doesn’t make. But it’s a matter of attacking them nevertheless, however incompetent one may feel vis-à-vis the ineffable perfections of nature’s glorious splendours. “

On 9th (or 10th) of July 1888 he confesses to Theo: “But the sight of the stars always makes me dream in as simple a way as the black spots on the map, representing towns and villages, make me dream“.

From word to deed takes place between 9 and 14 September. In fact, he begins on the 9th a long letter addressed to his sister Willemien: “I definitely want to paint a starry sky now. It often seems to me that the night is even more richly coloured than the day, coloured in the most intense violets, blues and greens. If you look carefully you’ll see that some stars are lemony, others have a pink, green, forget-me-not blue glow. And without labouring the point, it’s clear that to paint a starry sky it’s not nearly enough to put white spots on blue-black.“

He did not post it and resumed his letter on the 14th. In the meantime he painted his first starry night, the painting is called Cafe Terrace at night (currently at the Kröller-Muller Museum in Otterlo, the Netherlands):

“I started this letter several days ago, up to here, and I’m picking it up again now.  I was interrupted precisely by the work that a new painting of the outside of a café in the evening has been giving me these past few days. On the terrace, there are little figures of people drinking. A huge yellow lantern lights the terrace, the façade, the pavement, and even projects light over the cobblestones of the street, which takes on a violet-pink tinge. The gables of the houses on a street that leads away under the blue sky studded with stars are dark blue or violet, with a green tree. Now there’s a painting of night without black. With nothing but beautiful blue, violet and green, and in these surroundings the lighted square is coloured pale sulphur, lemon green. I enormously enjoy painting on the spot at night“.

And on September 16th, he describes his painting to Theo more briefly: “The second [painting of this week] shows the outside of a café, lit on the terrace outside by a large gas-lamp in the blue night, with a patch of starry blue sky.represents the outside of a cafe illuminated on the terrace by a large gas lantern in the blue night. with a corner of starry blue sky. […] The question of painting night scenes or effects, on the spot and actually at night, interests me enormously.“
We know exactly where the painting was executed: Place des hommes, now renamed Place du Forum. The map of Arles in Van Gogh’s time, shown below, shows its location, as well as other intramural sites where Vincent settled to paint La Maison jaune (The Yellow House) in September 1888), the Pont métallique de Trinquetaille (the Metallic Bridge of Trinquetaille) in October 1888) and Nuit étoilée sur le Rhône (Starry Night on the Rhone), on which I will return at length in the following post. 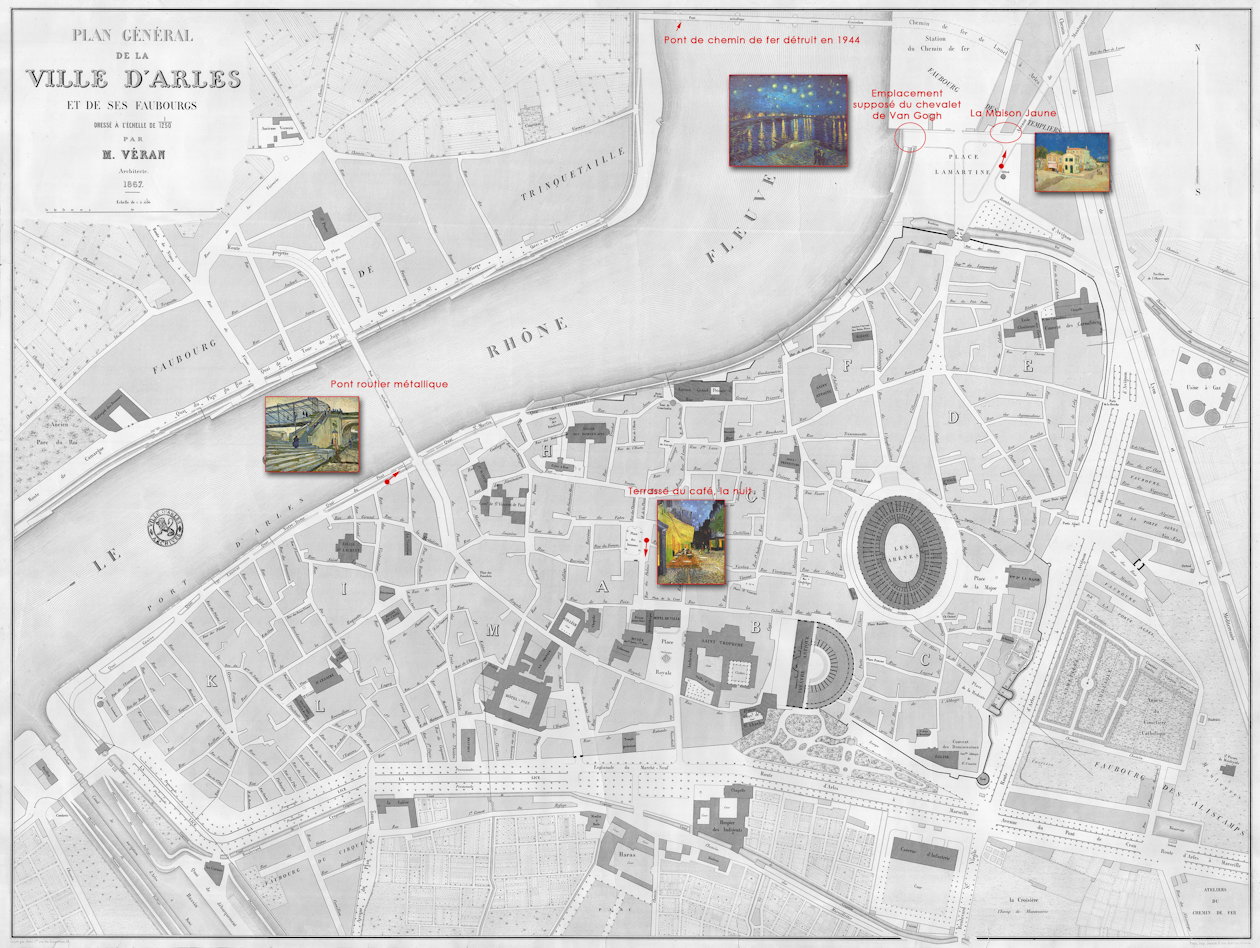 The café, which at that time was called the Terrace, has since been renamed Café Van Gogh. Fortunately, the historic site has not been ransacked by modern constructions as is so often the case elsewhere, and even today the walker immediately recognizes the layout of the streets and buildings painted by Vincent, day and night.
Now a question that arises is: are the stars he has represented on the canvas randomly arranged, or do they correspond to a real configuration of the night sky?
In the preparatory study for the painting shown below, the sky is just sketched with wiggling lines, without any star. It is quite possible that Vincent made this study during the day .
However, in view of van Gogh’s epistolary statements, everything suggests that he wanted to show a certain realism in the pictorial transposition of the firmament seen at night. Since, according to the letter that Vincent sent to his sister Willemien, we know the date of execution (between 9 and 14 September) within a few days, it is possible to check using a reconstitution software astronomical what portion of sky was represented by Vincent, seen from the Forum Square in a direction very close to the South (this is the orientation of the street).
Let’s use the excellent Stellarium software. Position us at the GPS coordinates of the Forum Square, namely 43 ° 40 ‘39.7 “N 4 ° 37’ 37.6” E, set the date from September 9, 1888 at about 10 pm, let us look south and let the map scroll to find a stellar configuration possibly close to that of the table, between 20 and 30° of declination (such is the height of the stars represented in the table).
I once read an article (which I lost references) claiming that it is the legs of the constellation Scorpio, with the stars α (the brilliant Antares), σ, β, δ and Scorpion π. The problem is that between 9 and 14 September, the constellation Scorpio is only above the horizon until 17h UT, after it passes below and can not be seen, even at the beginning of the night which in September falls well later. Also at that time the Moon was at its first crescent in the legs of Scorpio. This is not the correct identification. 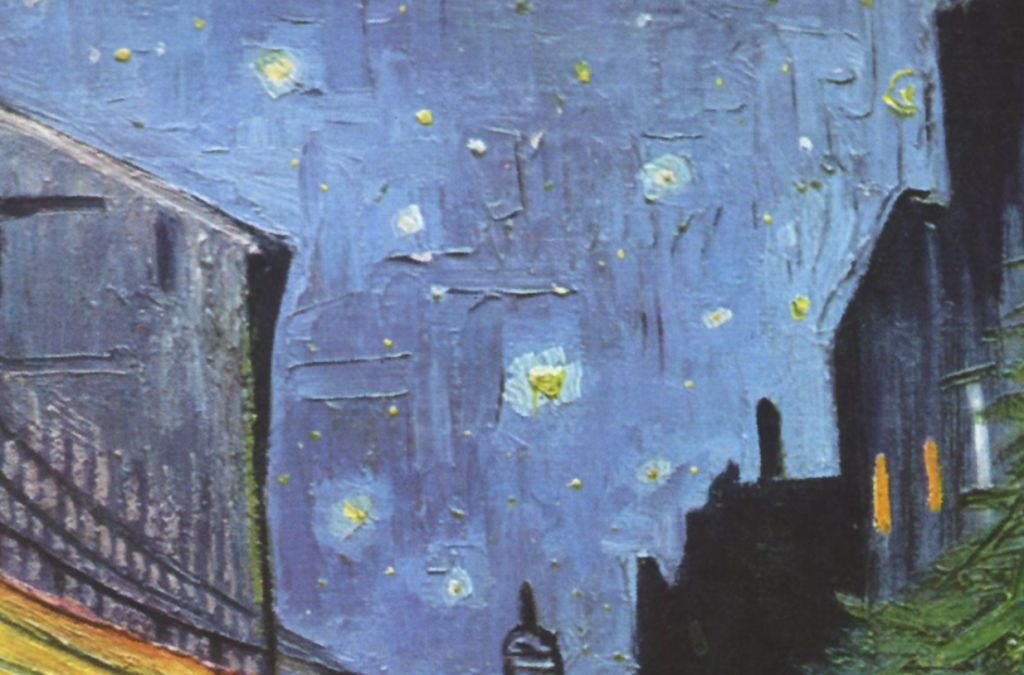 Let’s now examine the map of the sky seen between 9 and 14 September 1888 around 22h in the southern extension of the Forum Square: we see the stars of the constellation Aquarius up to magnitude 5, with its characteristic configuration shaped from Y.
I added the profile of the buildings hiding part of the field of view, traced the characteristic lines connecting the most brilliant stars, and compared with Vincent’s painting: 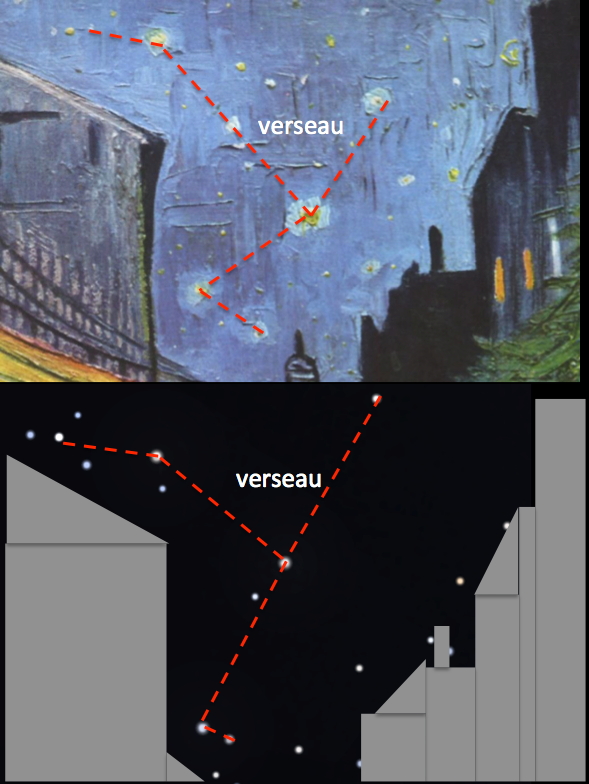 The identification seems pretty convincing … It also reinforces the epistolary statements in which Vincent expressed his concern to represent a real sky and not imaginary.
This will be even more spectacular in the two famous starry nights painted in Arles in 1888 and Saint-Rémy in 1889. I will analyze them in the same way in the following posts, with the key to very unexpected surprises …