At the same time, the installment of the large telescope at Mount Wilson, in the United States, allowed for a radical change in the cosmic landscape. In 1924, the observations of Edwin Hubble proved that the nebula NGC 6822 was situated far beyond our galaxy. Very rapidly, Hubble and his collaborators showed that this was the case for all of the spiral nebulae, including our famous neighbor, the Andromeda nebula: these are galaxies in their own right, and the Universe is made up of the ensemble of these galaxies. The “island-universes” already envisaged by Thomas Wright, Kant and Johann Heinrich Lambert were legitimized by experiment, and the physical Universe seemed suddenly to be immensely enlarged, passing from a few thousand to several dozen million light-years at the minimum. Beyond this spatial enlargement, the second major discovery concerned the time evolution of the Universe. In 1925, indications accumulated which tended to lead one to believe that other galaxies were systematically moving away from ours, with speeds which were proportional to their distance. END_OF_DOCUMENT_TOKEN_TO_BE_REPLACED 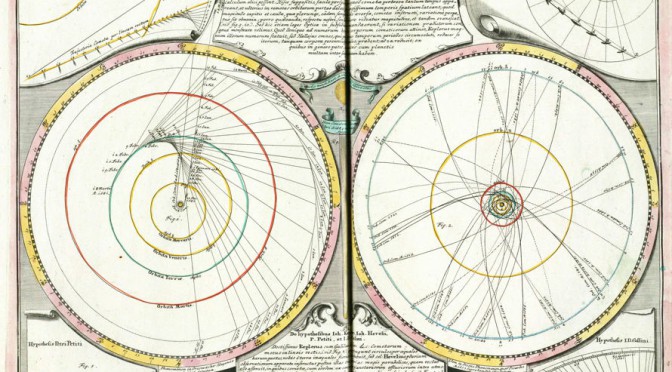 All the problems are not resolved in Newtonian cosmology, far from it. On the question of the distribution of stars in space, for example, Newton believed that they must occupy a finite volume since, he argued, if they occupied an infinite space, they would be infinite in number, the force of gravitation would be infinite, and the universe would be unstable. Newton moreover supposed that the stars were uniformly spread within a finite mass|like a galaxy, for example. But a problem of instability remained: since each celestial body is attracted by every other one, at the least movement, at the least mechanical perturbation, all the bodies in the universe would fall towards a unique center, and the universe would collapse. Newton’s universe is therefore only viable if it does not admit motion on the large scale: its space is rigid and its time immobile. END_OF_DOCUMENT_TOKEN_TO_BE_REPLACED