In 1927, in a seminal article entitled “A Homogeneous Universe of Constant Mass and Increasing Radius Accounting for the Radial Velocity of Extra-Galactic Nebulae“, Lemaître explained the observations of Hubble and Slipher by interpreting them, within the context of general relativity, as manifestations of the expansion of the universe. This expansion was taking place uniformly across the entire universe (which might be finite or infinite), not outwards from a particular point (in this sense the often quoted analogy of a balloon being inflated is misleading). It was not a case of matter moving within a fixed geometric framework, but of the framework itself dilating, of the very “fabric” of space-time stretching. END_OF_DOCUMENT_TOKEN_TO_BE_REPLACED 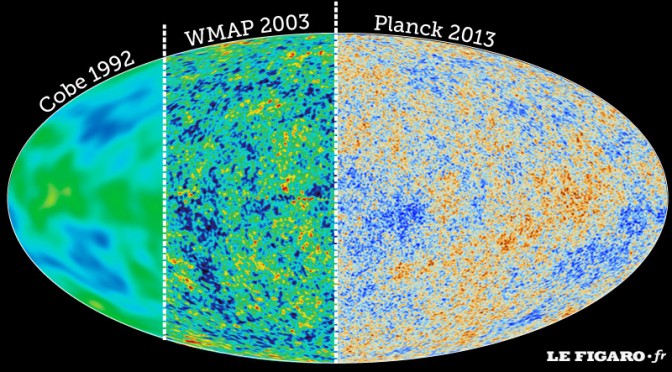 The term, isolated from its pejorative context, became part of scientific parlance thanks to a Russian-born American physicist George Gamow, a former student of Alexander Friedmann. Hoyle therefore unwittingly played a major part in popularising a theory he did not believe in; he even brought grist to the mill of big bang theory by helping to resolve the question why the universe contained so many chemical elements. Claiming that all the chemical elements were formed in stellar furnaces, he was contradicted by Gamow and his collaborators Ralph Alpher and Robert Hermann. The latter took advantage of the fact that the early universe should have been very hot. Assuming a primitive mixture of nuclear particles called Ylem, a Hebrew term referring to a primitive substance from which the elements are supposed to have been formed, they were able to explain the genesis of the lightest nuclei (deuterium, helium, and lithium) during the first three minutes of the Universe, at an epoch when the cosmic temperature reached 10 billion degrees. Next they predicted that, at a later epoch, when the Universe had cooled to a few thousand degrees, it suddenly became transparent and allowed light to escape for the first time. Alpher and Hermann calculated that one should today receive an echo of the big bang in the form of « blackbody » radiation at a fossil temperature of about 5 K. Their prediction did not cause any excitement. They refined their calculations several times until 1956, without causing any more interest; no specific attempt at detection was undertaken. END_OF_DOCUMENT_TOKEN_TO_BE_REPLACED