In 1927, in a seminal article entitled “A Homogeneous Universe of Constant Mass and Increasing Radius Accounting for the Radial Velocity of Extra-Galactic Nebulae“, Lemaître explained the observations of Hubble and Slipher by interpreting them, within the context of general relativity, as manifestations of the expansion of the universe. This expansion was taking place uniformly across the entire universe (which might be finite or infinite), not outwards from a particular point (in this sense the often quoted analogy of a balloon being inflated is misleading). It was not a case of matter moving within a fixed geometric framework, but of the framework itself dilating, of the very “fabric” of space-time stretching.

In 1931 Lemaître dared to make an even more outrageous assumption: if the universe is expanding now, must it not have been much smaller and denser at some time in the past? Trying to find a link between nebulae and atoms he applied the latest knowledge about particles and radioactivity: “A comprehensive history of the universe ought to describe atoms in the same way as stars.” In the distant past the universe must have been so condensed that it was a single entity, a “primeval atom”, which Lemaitre envisaged as a “quantum”, referring to the then new discipline of quantum physics. “We might imagine that space began as a primeval atom and that the birth of space was also the birth of time.” 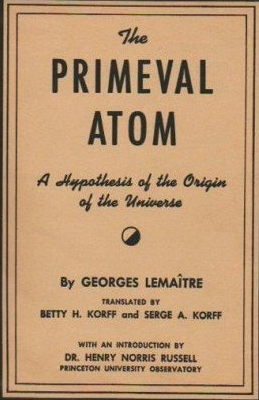 This idea was very poorly received by other scientists. The fact that Lemaître was a mathematician, allied to his religious convictions (he had been ordained as a priest in 1923), no doubt added to their natural resistance towards the instigation of a new world view. By 1950, when Lemaitre published a summary, in English, of his theory, entitled The Primeval Atom: An Essay on Cosmogony, it was thoroughly unfashionable. Two years previously the rival theory of a “steady state” universe, supported principally by Thomas Gold in America and by Hermann Bondi and Fred Hoyle in Britain, had met with widespread acclaim. Their argument was that the universe had always been and would always be as it is now, that is was eternal and unchanging.

Seldom charitable towards his scientific adversaries, Fred Hoyle made fun of Lemaître at a conference in Pasadena in 1960 by introducing him as “the big bang man”. The expression “big bang”, isolated from its pejorative context, became part of scientific parlance thanks to a Russian-born American physicist George Gamow, a former student of Alexander Friedmann. Hoyle therefore unwittingly played a major part in popularizing a theory he did not believe in; he even brought grist to the mill of big bang theory by helping to resolve the question why the universe contained so many chemical elements.

Gamow predicted that vestiges of the early universe, much cooler than it had been then, would be detectable as a particular pattern of microwave radiation. Just such “background” radiation was detected in 1964 by Arno Penzias and Robert Wilson. After half a century of rejection, Lemaitre’s primeval atom, in the guise of the catchphrase “big bang theory”, had at last been accepted by theoretical physicists.

The so-called big bang models are based on observations and experiments whose results have been extrapolated as far as possible into the past (it is not possible to get back to the very beginning of the universe) and are constructed by a process of hypothesis and calculation – as is the rule in physics. No other kind of model corroborates as many observed phenomena as big bang theory.[ii] Other theories, such as those of “tired light” and the “static universe”, have tried to compete with it and even to displace it (by inventing arbitrary laws of physics), but they have been contradicted by observation – particularly by that of background radiation. Only big bang theory, which is now almost universally accepted by astrophysicists, can satisfactorily explain the mass of observations made by the great telescopes and the results of experiments carried out in particle accelerators and retrace the principal stages in the creation of the universe – a process which took not six days but 14 billion years!

One thought on “Cosmogenesis (9) : The Big Bang Discovery”