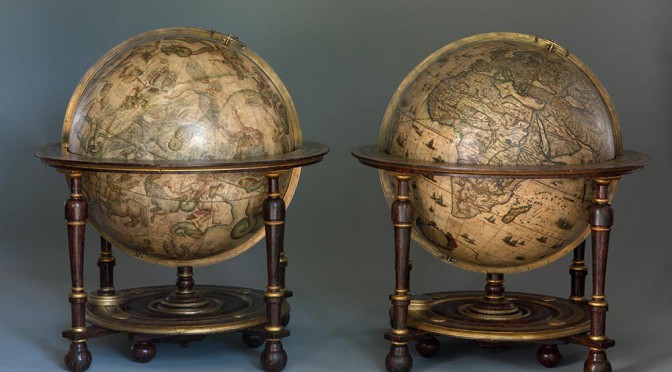 Willem Janszoon Blaeu (1571-1638) founded one of history’s greatest cartographic publishing firms in 1599. Mostly renowned as a cartographer, he also made terrestrial and celestial globes, various instruments such as quadrants, a planetarium and a tellurium. He invented mechanical devices for improving the technics of printing. As an astronomer, a former student of Tycho Brahe, Willem Blaeu made careful observations of a moon eclipse, he discovered a variable star now known as P Cygni, and carried out a measurement of a degree on the surface of the earth (as his countryman Snell did in 1617).

THE LIFE AND WORK OF WILLEM BLAEU

The Blaeu family has its origin in the island of Wieringen, where about 1490, Willem Jacobszoon Blauwe – the grandfather of Willem – was born. From his marriage with Anna Jansdochter sprang six children. The second son, Jan Willemsz. (1527- before 1589) was the father of Willem Blaeu, and continued the family tradition by practicing the prosperous trade of herring packer. From his second marriage with Stijntge, Willem Jansz. Blaeu was born at Alkmaar or Uitgeest.

At an early age, Willem Blaeu went to Amsterdam in order to learn the herring trade, in which he was destined to succeed his father. But Willem did not like this work very much, being more inclined to Mathematics and Astronomy. He did not attend a university and worked first as a carpenter and a clerk in the Amsterdam mercantile office of his cousin Hooft.

However, in 1595 he became a student of Tycho Brahe (1546-1601). The celebrated Danish astronomer demanded a high standard of his pupils. Some were invited by him, others were undoubtedly taken on special recommendation. We may therefore presume that young Blaeu had reached a good standard of education and technical skill, since he was considered worthy to become a student of the great astronomer. Blaeu lived on the Island of Hven over the winter of 1595/1596, at Brahe’s famous observatory in Uraniborg. Thanks to this exact knowledge acquired from Brahe, Blaeu was able to make tables for sun declination ; especially he also learned from Brahe to make globes and instruments like the quadrants.

As it is well-known, Tycho Brahe had his own cosmic system, a sort of compromise between the Ptolemaic and Copernican. Willem Blaeu, although a supporter of the Copernican system, remained cautious during the rest of his career. In his books he mentioned the Copernican model as one of the existing theories, besides the Ptolemaic and Tychonic. It will not only save him for confrontations with religious people, but this attitude was also beneficial for his sales.

After his return from Hven in 1596, Blaeu settled in Alkmaar. Very little is known of his stay here. He married, probably in 1597, Marretie or Maertgen, daughter of Cornelis from Uitgeest. Here too, his eldest son Joan was born. END_OF_DOCUMENT_TOKEN_TO_BE_REPLACED