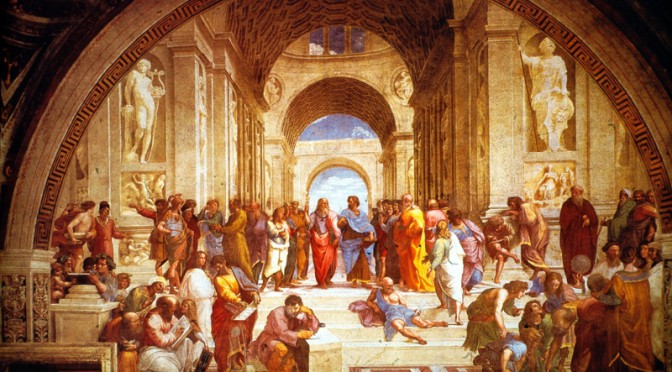 The atomist philosophy was strongly criticized by Socrates, Plato, and Aristotle. Moreover, by affirming that the universe is not governed by gods, but by elementary matter and the void, it inevitably entered into conflict with the religious authorities. In the fourth century BCE, Anaxagoras of Clazomenae was the first scholar in history to be accused of impiety; however, defended by powerful friends, he was acquitted and was able to flee far from the hostility of Athens. Thanks to its two most illustrious spokesmen, Epicurus (341-270 BCE), who founded the first school that allowed female students and Lucretius (first century BCE), author of a magnificent cosmological poem, On the Nature of Things, atomism continued to flourish until the advent of Christianity. It was however marginalized over the course of the first centuries of the christian era, and would not again be part of mainstream science until the seventeenth century.

Plato (428-347 BCE) considered a finite universe, enclosed by an ultimate sphere that contained the stars. To speak of “space” (the English term comes from the Latin spatium), Greek terminology used different names: khaos, kosmos, apeiron, kenon, pan (“all”), ouranos (“sky”), etc. In Timaeus, a specific term was introduced, khora, which designates the expanse or space as a receptacle for matter, and defined by it. Plato went on to play an essential role in the evolution of astronomical thought by insisting upon the fact that scientists must not content themselves with contemplation of the stars but must also use mathematics and geometry to discover the true nature of the celestial bodies and explain their movements. All of Greek astronomy, from Aristotle and Eudoxus to Ptolemy (who would create the crowning form of these ideas five centuries later), would flower around this precept of a geometric astronomy.

Aristotle (384-322 BCE) opposed himself to Plato by not developing a theory of space properly speaking, but a theory of place (topos), distinct from the expanse and independent of matter. The place is the limit which surrounds things. The universe is not a place, but the place, the sum total of all the places occupied by bodies. Opposing himself also to the atomists, Aristotle believed that the number of bodies was necessarily finite. On the cosmological level, his conception approached that of Plato: a fixed Earth at the center of a finite world, circumscribed by the sphere which contains all the bodies of the universe. But this exterior sphere is “nowhere,” since beyond it there is nothing, neither void nor expanse.

There also exists, in Greek antiquity, three great schools of cosmological thought. One, which includes the Milesians, Stoics, etc., makes a distinction between the physical world (the material universe) and space: the universe is considered as a finite island plunged within an infinite extracosmic space without any properties, which surrounds and contains it. The two others, atomist and aristotelian, consider that the very existence of space follows from the existence of bodies; the physical world and space coincide; they are infinite for the atomists, finite for the aristotelians. Even today, most people have in mind one or the other of these conceptions.

The defenders of a finite universe nevertheless come across a logical difficulty: if what is beyond the world still makes up part of the world, the world cannot be bounded without there being a contradiction. This “edge paradox” would not be resolved until the end of the nineteenth century.

In the same way that atomism was judged to be too materialist, the Aristotelian doctrine, which implies eternal time and a non-created universe, was rejected by the first theologians of christianity. Until the sixth century, the cosmological models of the West returned to the archaic conceptions of the Milesians, namely a finite cosmos bathing in the void, with the added distinction that the cosmos takes the form of a tabernacle, or of a heart.