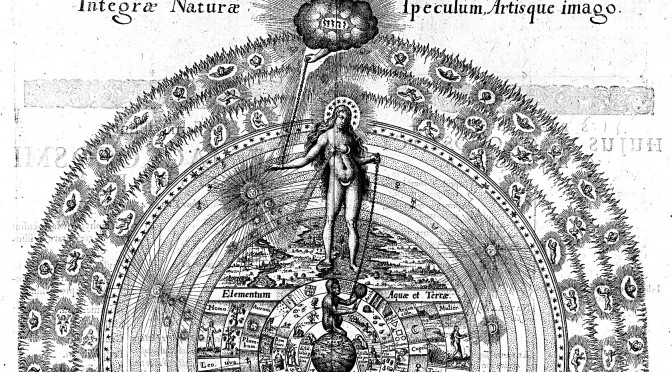 This primordial world was form without form,
A confused heap, a shapeless melange,
A void of voids, an uncontrolled mass,
A Chaos of Chaos, a random mound
Where all the elements were heaped together,
Where liquid quarrelled with solid,
Blunt with sharp, cold with hot,
Hard with soft, low with high,
Bitter with sweet: in short a war
In which the earth was one with the sky. [i] “

Between 1617 and 1619 the English physician and occult philosopher Robert Fludd compiled an encyclopaedia of human knowledge in four volumes entitled The Technical, Physical and Metaphysical History of the Macrocosm and Microcosm, the first volume of which is headed “The Macrocosm Metaphysics & Cosmic Origins”. The diagram in fig. 241 is an example of the curious mixture of science and occultism to be found in Fludd’s account of the Creation.

Even more extravagant is the “harmony of the world’s birth” described by the German Jesuit and encyclopaedist Athanasius Kircher, who wrote books on a variety of subjects (see fig. 244). His Musurgia Universalis, published in 1650, is in many ways reminiscent of Fludd’s Utriusque Cosmi and Kepler’s Harmony of the World and its ambitious title, The Universal Book of the Muses, immediately declares Kircher’s completist intentions. In a lengthy chapter he gives his own version of the Creation story in musical terms, comparing the world to an organ operated by God and thereby placing himself in the tradition deriving from Pythagoras and Plato, who saw the cosmos as a harmonious whole consisting of “discordant components”.

Go to next post Cosmogenesis (7) : The Date of the Creation

One thought on “Cosmogenesis (6) : The Creation in the Renaissance”