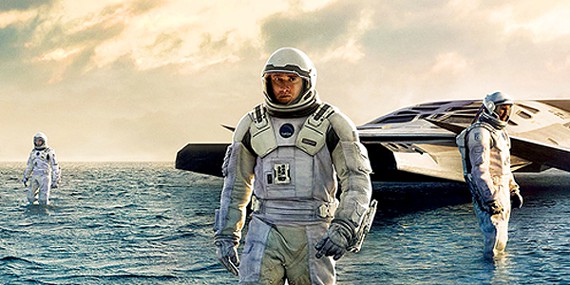 In november  2014, the Hollywood blockbuster and science-fiction movie Interstellar was released on screens and  much mediatic excitation arose about it.

This is the third of a series of 6 posts devoted to the analysis of some of the scientific aspects of the film, adapted from a paper I published last spring in Inference : International Review of Science.

VISUALISATION OF THE ACCRETION DISK

Since a black hole causes extreme deformations of spacetime, it also creates the strongest possible deflections of light rays passing in its vicinity, and gives rise to spectacular optical illusions, called gravitational lensing. Interstellar is the first Hollywood movie to attempt depicting a black hole as it would actually be seen by an observer nearby.

For this, the team at Double Negative Visual Effects, in collaboration with Kip Thorne, developed a numerical code to solve the equations of light-ray propagation in the curved spacetime of a Kerr black hole. It allows to describe gravitational lensing of distant stars as viewed by a camera near the event horizon, as well as the images of a gazeous acccretion disk orbiting around the black hole. For the gravitational lensing of background stars, the best simulations ever done are due to Alain Riazuelo[i], at the Institut d’Astrophysique in Paris, who calculated the silhouette of black holes that spin very fast, like Gargantua, in front of a celestial background comprising several thousands of stars.

But perhaps the most striking image of the film Interstellar is the one showing a glowing accretion disk which spreads above, below and in front of Gargantua. Accretion disks have been detected in some double-star systems that emit X-ray radiation (with black holes of a few solar masses) and in the centers of numerous galaxies (with black holes whose mass adds up to between one million and several billion solar masses). Due to the lack of spatial resolution (black holes are very far away), no detailed image has yet been taken of an accretion disk ; but the hope of imaging accretion disks around black holes telescopically, using very long baseline interferometry, is nearing reality today via the Event Horizon Telescope[ii]. In the meanwhile, we can use the computer to reconstruct how a black hole surrounded by a disk of gas would look. The images must experience extraordinary optical deformations, due to the deflection of light rays produced by the strong curvature of the space-time in the vicinity of the black hole. General relativity allows the calculation of such an effect. END_OF_DOCUMENT_TOKEN_TO_BE_REPLACED