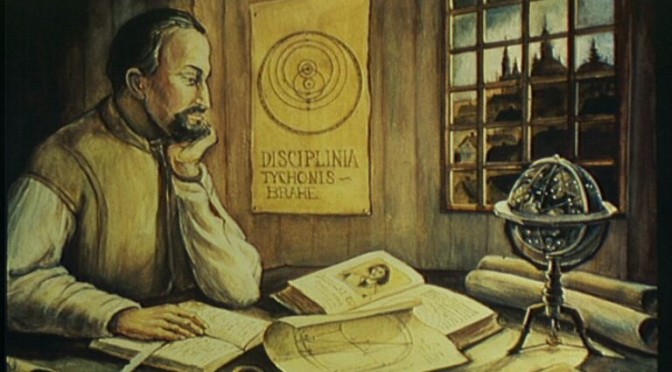 Despite his innovative methods, Kepler wrote two studies of the cosmos in the style of the ancient Greeks: Mysterium Cosmographicum (The Secret of the Cosmos) in 1596 and Harmonices Mundi (The Harmony of the World) in 1619. At this turning point between ancient and modern thinking Kepler was steeped in a tradition which connected cosmology explicitly with the notion of divine harmony. But what Kepler sought to express was not the numerical mysticism of the Pythagoreans; his starting point was geometric patterns, which he saw as “logical elements”. His profound desire to devise a rational explanation for the cosmos led him to establish procedures which resembled those of modern science.

From Polyhedra to Ellipses

In the 1590s, when he was practising as a mathematician in Graz (then part of Styria) Kepler adopted the ideas of Copernicus. In the heliocentric model, which the Polish thinker had propounded fifty years earlier, the simultaneous motion of the earth around the sun and about its own axis explained the observed motion of the planets and stars. Kepler set out to prove that this simple hypothesis, which had been an attempt to “save the appearances”, did indeed correspond with reality. In doing so, however, he noticed that the circular orbits of the planets around the sun proposed by Copernicus were not in keeping with his precise observations. Being a fervent Christian, Kepler wanted at the same time to glorify God, who he believed was responsible for the harmonious arrangement of the universe (the cosmos, like the Bible, proclaiming the glory of God like a book without words whose secrets it was man’s duty to discover). This aim is stated in the very first lines of the preface to The Secret of the Cosmos: “It is my intention, reader, to show in this little book that the most great and good Creator, in the creation of this moving universe and the arrangement of the heavens, looked to these five regular solids, which have been so celebrated from the time of Pythagoras and Plato down to our own, and that he fitted to the nature of those solids the number of the heavens, their proportions and the law of their motions.” (1)

Kepler saw this divine harmony most clearly in the distribution of the planets and in their relative distances from the sun. Everything was an expression of that harmony: poetry and music as well as mathematics and geometry, which he claimed to be of fundamental importance. In this he can be seen as part of the great movement to reinstate mathematics as a tool for studying nature, a movement which was then in its infancy but which would later recruit even more radical followers like Descartes and Galileo. It was the latter who was to declare in The Assayer of 1623: “Philosophy is written in this grand book – I mean the universe – which stands continually open to our gaze, but it cannot be understood unless one first learns to comprehend the language and to interpret the characters in which it is written. It is written in the language of mathematics, and its characters are triangles, circles and other geometrical figures, without which it is humanly impossible to understand a single word of it. Without these, one is wandering about in a dark labyrinth.” (2) This resurgence of mathematics would soon make numerology and numerical mysticism obsolete, just as the development of astronomy and astrophysics were to bring about the decline of astrology as a system of interpreting the universe.

In his Secret of the Cosmos Kepler applies geometry in a new way to solve the problem of the relationship between the planetary orbits. Using regular polyhedra, symmetrical geometric shapes familiar to the ancient Greeks, he argues that the five “perfect” solids (cube, octahedron, dodecahedron, tetrahedron and icosahedron), which Plato had used to represent the five elements (earth, water, air, fire and ether), should correspond exactly to the intervals between the six then known planets (Mercury, Venus, Earth, Mars, Jupiter and Saturn). He goes on to demonstrate mathematically how these Platonic shapes can be arranged one inside the other exactly in accordance with the structure of the solar system. For Kepler this was no coincidence: convinced that he had discovered “the secret of the cosmos”, he interpreted the correspondence between the planets and the polyhedrons as a novel and rational way of understanding the fundamental harmony of the universe.

In The Secret of the Cosmos Kepler justified his use of polyhedra at the same time as questioning the pre-eminence of the curve: “if at the Creation God had taken cognizance only of the curved, except for the Sun in the centre, which was the image of the Father, the Sphere of the Fixed Stars, or the Mosaic waters, at the circumference, which was the image of the Son, and the heavenly air which fills all parts of the space and the firmament, which was the image of the Holy Spirit – then, except for these, I say, nothing would exist in this cosmic structure.” (3) But, since so many other heavenly bodies exist, “we must of necessity seek the causes of them all in straightness” and specifically in regular polyhedra, whose perfection is synonymous with that of the celestial sphere.

Kepler would never be able to discard completely this quasi-mystical view of the cosmos, even though he abandoned the idea of a strict correspondence between the shapes of polyhedra and the orbits of the planets in 1609 when he discovered that those orbits were elliptical rather than circular and therefore would not fit into such a model. It was nevertheless his obsessive search for underlying harmony that led him to the laws of planetary motion, which more or less contradicted his initial ideas and which revolutionised the study of astronomy. In his Astronomia Nova (The New Astronomy) of 1609 Kepler modified the Copernican model of the solar system, shattering the belief in the perfection of circular orbits; he even went as far as suggesting that it is the sun’s influence which causes the planets to follow their orbits.

In The Harmony of the World Kepler finalised his laws of planetary motion. The third of these, known as the law of orbital periods, establishes a “harmonic” relationship, in the mathematical sense of the word, between the axis of the orbit and the orbital period and enables the movement of the planets to be described and calculated much more easily, without however explaining the physical causes of those movements. That task would fall to Isaac Newton, for whom cosmic harmony was a manifestation of universal laws of attraction.

Kepler’s career was greatly affected by his meeting with the Danish astronomer, Tycho Brahe. In 1576 Brahe’s patron Frederick II, king of Denmark, had granted him permission to construct a magnificent house and observatory, a temple to astronomy called Uraniborg, on the island of Hven. Brahe designed the building according to the theory of “divine proportion”, which had been developed by the philosophers of the Italian Renaissance and applied to architecture principally by Palladio.

After the death of his patron, Tycho Brahe fell into disgrace and left Uraniborg. He re­established himself underthe patronage of the Holy Roman Emperor, Rudolf II, in Bohemia, where he invited Kepler to work with him. When Brahe died in 1601, it was Kepler who inherited the record of his uniquely detailed observations, working intensively on the information relating to the orbit of Mars. By 1605 Kepler had determined its shape: not a circle or a combination of circles, but an ellipse with the sun at one focus.

4 thoughts on “Geometry and the Cosmos (1) : Kepler, from polyhedra to ellipses”